Coding on your Chromebook with Online Compiler 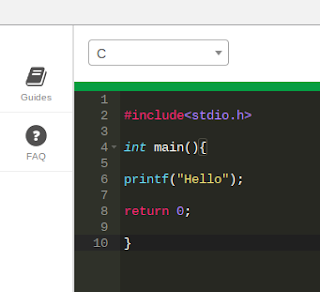 In this first of a series on Chromebook coding, we are looking at ways for teachers to introduce their students to programming languages, to empower their creativity and enhance their technical and mathematical thinking.

Coding in a Chromebook lab dispenses with the need to download multiple compilers onto each PC.

There are many apps in the Chrome browser that teachers can use. We will begin with Online Compiler. It is simple and easy to use, and works for the following languages:

C - Linux was written in this language, (as well as Beethoven's Fifth Symphony :). Written by  Dennis Ritchie at the Bell Labs research facility, it is one of the most widely used computer programming languages of all time.
C++ - a descendant of C. C++ was written by Bjarne Stoustrup, who teaches at UT Austin. It is an object-oriented programming language.
Python - created by Guido van Rossum, Python is an interpreted language in which you can write things with fewer lines of code. Version 3 is recommended. You can write regular code like in C, or go object-oriented like in C++.
PHP - created in 1994 by Rasmus Lerdorf, PHP is a web-based, interpreted programming language, useful for generating web pages. PHP looks like C on the screen - there are many similarities in syntax.
Swift - written by Apple and used to support their iOS operating system. It's a compiled language, but in Online Compiler it compiles in one step, like an interpreted language.

Although this app is called Online Compiler, it interprets everything in one step, whether it is a compiled language, an interpreted language, or web-based. Note: it might be best to copy your coding projects into Google Docs to back them up, after creating them in Online Compiler.

Pro: Good for an introduction into a handful of programming languages.
Cons: No network programming, no file i/o, almost no documentation or help.

To get Online Compiler, go to this link.