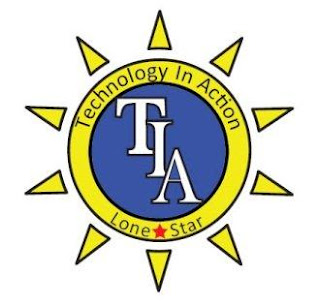 Note: sorry, Leslie Taylor has a case of amnesia, she claims, about 2013, and Roy is the only one in the office remaining who was there. So Roy gets to interview himself about our premiere training event of that year, held at the Advanced Technology Complex on Long Road.

Question: How was this TIA different from previous TIA's?

Answer: Well, we had more people this time - about 1000. We had more chairs out on the floor now  - all the way to the back of the commons area, and into the walkway. We had people from Bridgeport, ISD to Wills Point ISD. This was our 2nd TIA as "Lone Star TIA", to emphasize the expanded ambition of the event. And we shortened the event from three days, to a day and a half. We chose to up the intensity, with a closing keynote and wonderful door prizes. Finally, with practically everyone being off contract at Denton ISD, one and a half days would impose a smaller demand on their free time between school years - we figured this would actually get more teachers to participate.

Q: This was your fourth TIA. Were there any surprises?

A: Good ones. We had more sponsors, so we had more money coming in, and we could give out more door prizes. Some of these were directly donated from vendors. We gave away a copy of PhotoShop Elements, a digital camera, a Garmin (how quaint), a Nook, a Mobi View (a handheld interactive whiteboard), an HP laptop, and, for the climax - a Toshiba 32" television. We had help from TFE, the Denton Public School Foundation, OdysseyWare, Balfour/Beatty, Schoolwires, Classworks, and other companies. We set up sponsor table visits, to give the vendors some love. We had the Denton High School Jazz band playing upstairs for awhile, around the time we did our giveaways, which included a $500 scholarship for college to a lucky student.

Q: So TIA was becoming more "par for the course"?

A: Yes. Now that we were even more sure of ourselves, we could branch out. We had more video support this year, with Chris Vochoska helping out by videoing keynotes and running a little interview booth, in addition to my video coverage of the keynotes. Oh, and this year we sent some volunteers out with flip cams to videotape some of the breakout sessions. Phil Stubbs returned, from Melbourne, Australia. The Flipped Classroom: Who Owns the Learning? was his keynote this year. Our Department of Instructional Technology had begun to develop a relationship with him, and whenever he was in the Denton area he would drop by. His company is called Verso. We had our Photoshop I and II events, taught by Dena Wilson and Wil Milne, again this year. You could pay $100 or so, take the class all day, and then pass a certification test.

The food was great - with the cuisine school right there, next to the commons area, it was easy to prep food, or bring in deliveries and set them up.

There were more smart phones in abundance - the iPads had company. We didn't have Chromebooks yet. Some people were still sporting netbooks.

On our first day we got an early start at 7:00 a.m. with coffee and snacks ready to go. We had our first breakout sessions at 8:00. Some of them were two and a half hours long. We also had 9:00 breakouts, with our keynote, Phil Stubbs, starting at 10:45. We had snacks, coffee, and juice for everyone to up their glucose levels before Phil explained his approach to the flipped classroom.

We had about 100 breakouts (same number as last year, about, but over one and a half days instead of three), and I taught two of them!

Q: Tell me about your breakout sessions?

A: My first one was Go the Distance with Distance Learning, where I demonstrated what could be done with our Tandbergs and virtual field trips, as well as long distance professional development, mediated by Region 11 and Connect2Texas.net. My second, the next day, was Getting Started with Show and Share. Show and Share was at its heyday in 2013, because the year before we had integrated it with our distance learning setup - we could record distance learning events and play them back from the Show and Share web interface. That was handy for flipped classrooms - teachers could make Show and Share videos from their own classroom PCs (equipped with a webcam), upload them to Show and Share, and their students could view the videos from home if they had trouble understanding something. I did my breakouts at 8:00 each day so I could get to my keynotes and videotape them.

Q: Besides the keynotes, who did you have speaking to people?

A: On the first day, we had lunch speakers! - Dr. Penny Reddel, Associate Superindent at Lewisville ISD; and Barbara Brown, CTO, also at Lewisville. And we had some high school students speaking there in a panel discussion. Jamie Wilson gave a great speech before Phil Stubbs' keynote. Mike Mattingly gave the intro to Phil Stubbs' speech.  The flipped classroom, as a concept, was still new to some people, and Phil talked about that.

Q: What were some things happening in 2013 that were different from today?

A: Google hangouts were still kind of new. We had a breakout session on that. Some of the more "period-piece" sessions involved Jing, and what to do when you only had one mini-iPad for a whole classroom. That's right, iPad deployment was a big deal back then, as were Edmodo and Doceri. Google Forms, BYOD, Blended teaching Flipped classroom - these were all kind of new and gettng some attention at TIA 2013.

Q: Things ended up well on the second day?

A: Yes, Maria Henderson from Apple, (who returned the next year) gave the closing keynote, after which we gave away all those cool door prizes I was talking about. Everybody got to go home mid-day, and my department got to pack up everything and drive it back to the office in the sweltering heat!