Google Maps is for finding your way; Google Earth is for getting lost. 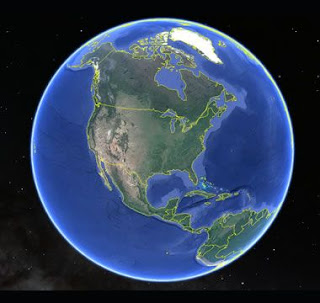 I remember when my nine-year-old daughter started playing with Google Earth – she felt quite at home with the view of Earth from outer space, which, when I was that age, took the world by storm! Pictures of Earth viewed from the moon were on the cover of Life magazine. Over the years though, she’s been using Google Maps a lot more, where she seizes every opportunity to yell at me when I fail to follow her navigation, or get confused by construction on I35.


Well, there’s a new version of Google Earth out – and it has great new features.

There's an "I'm feeling lucky" icon, which looks like a solo die (as in dice). When I clicked on it, I found myself at Bangka Island in Indonesia, which has a population of 1 million people! Never heard of it before.


Zooming into my home from outer space, I notice that I’m no longer confined to a north-south view – I can rotate my viewpoint any way I please. You get that option by clicking on the ‘3D’ button. It slants the view also, and starts with an automatic rotation, which stops when you start zooming in. Everything looks better in 3D. Also, you can record movies of your navigation in 3D view.

But the most interesting new feature is Voyager. Basically your map of the world has little location icons on it, and you can click them and see photos and embedded Youtube videos associated with that location. I checked out the ones from the Gulf of California – they were quite beautiful. Other companies s are collaborating with Google about creating content for Voyager. (I think the city of Denton should get on this bandwagon!) Some featured aspects of Voyager:


Don’t’ forget about other, older, features, like Mars, Moon, and Street View.

Google Earth works on Android, and any device that can host the Chrome browser.
Posted by Roy Verges at 3:38:00 PM